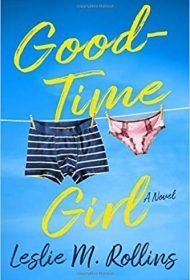 In this romantic adventure, the heroine learns to leave the past behind, channel her righteous anger, and take charge of her life.

At almost 50, Leah Mason is art director at a marketing firm, single, in love with her two dogs, and heavy into therapy. When she impulsively buys a gun, her whole life changes. Suddenly she feels empowered enough to act on her impulses. She seduces her 22-year-old nextdoor neighbor, Flynn, and, in an act of feminist protest, sets in motion a prank at Victoria’s Secret involving lighting thongs on fire and shooting a “come hither” mannequin. Only when the police arrive on her doorstep does she finally begin to realize the extent of her misdeeds— and the pain and suffering she has caused her boy toy and others as she tries to out-run middle age.

The author is a solid writer. Although she has inexplicably set the book in 2003, rather than current times, she has the chick lit formula down, delivering an amusing heroine and a hot neighborhood squeeze. Befitting the genre, the crimes are lightweight, rather than dangerous—a kind of foreplay to sex; after an overworked Leah shoots a hole in her boss’s chair one evening, for example, she briefly debates whether it’s illegal to shoot a chair, then thrilled by her act, runs home to get physical with Flynn.

Although a generally breezy read, the book has a few misfires. At times, the sex talk is raunchy – and in some cases corny– rather than electrically charged. The sessions with Leah’s therapist make for tepid reading, and her overwrought hormones and long feminist diatribes can be wearying.

Still, Leah is a likeable heroine, and readers will sympathize with her plight as she contemplates what she must give up to move forward. The book concludes satisfyingly as she realizes that her year-long misadventures came at a price – but also brought her new understanding of life and love.