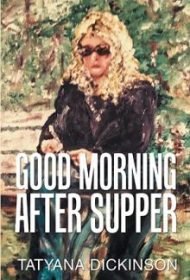 Espionage. Romance. Frequent flier miles. All of these—and a big dose of culture clash—come into play in Good Morning After Supper. Author Tatyana Dickinson’s novel features a heroine well-trained in undercover work who is surprised when she’s once again called upon to use those skills.

Alex (also referred to as Alexandra or Aleksandra) Campbell is married and living in Connecticut when she’s called back to mother Russia by the Ministry of Internal Affairs (KGB), where she received her training. On arrival, she’s nearly killed and learns two things are at play: Her first husband plans to challenge Vladimir Putin in the next presidential election, and as they are still legally married he needs a divorce; however, someone wants the contents of a Swiss safe deposit box that Alex can open as long as the couple are legally married, and he’s kidnapped her to make the heist. Can she seduce this enemy into working with her? Her life hangs in the balance.

This premise is juicy and the plot is rapid-fire fun. Alex is a cynical, funny protagonist. The title is a clever comment on the sense of unreality one gets while passing through multiple time zones.

Unfortunately, the book is hampered by Dickinson’s difficulties with the English language. There are numerous misspellings (e.g., “snick” for sneak) and grammatical mistakes (“I took a shower and brush my teeth”; “Okey-dokey is one of my pad peeves. I was always hear the jokes about it at the club back in CT”). Punctuation and quotation marks are inconsistently applied. And while it’s possible to extract the outline of the story, working through some passages is extremely difficult.

Good Morning After Supper is full of potential. Even with the roadblocks, it’s possible to root for Alex to succeed and become invested in her adventures. But the narrative needs major rewrites and possibly some cultural translation to succeed as an English-language text.