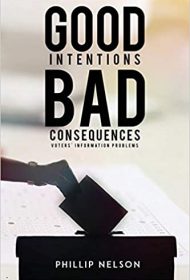 This is a serious book by an American emeritus economics professor who argues that voters could use better information to elect better leaders, to the greater good.

Author Phillip Nelson acknowledges voters need better information, but he focuses on just one group: “naïve altruistic liberals.” Citing economics literature, he argues that most liberals want to improve the world, making them altruists. But when they vote, most fail to consider which societal virtues would subsequently be at risk, such as the free market, making them naïve. He disregards conservatives, because they vote their own self-interests, and he posits that people make better decisions that way.

Unfortunately, Nelson doesn’t back bold claims with cogent arguments that walk readers through supporting facts, as when he writes without explanation that “naïve liberal altruists’” votes would change to society’s benefit if they had more information about policy outcomes. His authority is further diminished when he repeatedly asserts grievances against liberals. For example, he writes that liberals pay “lip service to the democratic ideal, but hardly practice it.” He also notes that over the last 60 years, liberals came to dominate academia, promoting political messages at the expense of other “legitimate alternative views.”

Nowhere does Nelson explain what “better information” means, where voters can find it and how they should evaluate it. Significantly, his analysis ends by 2016 (based on the lack of later citations for this 2020 book). He fails to consider how Fox News and social media play out-sized roles in delivering information and disinformation to voters.

At 93, Nelson brings experience and a sharp mind to this project. But careless editing— including misspelling names in citations, such as Charles “Krautheimer” rather than Krauthammer—also detract from the book’s credibility as a scholarly work.

Nelson points to confirmation bias as one hurdle to voters getting better information. But the people most likely to appreciate this book are those confirming their own bias: that liberals are the problem an emeritus economist needs to write about.