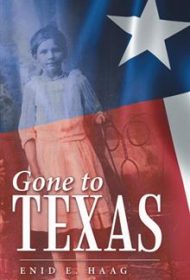 Enid E. Haag’s Gone to Texas is an historical novel set in the early 1900s, during the time of the great San Francisco earthquake.

The story opens with the real-life drama of Enrico Caruso, the great tenor, surviving the 1906 earthquake. Having rushed from the crumbling Palace Hotel as buildings crumbled all around, he encounters 10-year-old Emma, alone and terrified in the street, her father, mother and brother gone missing. Caruso befriends her, escorts to safety and becomes her mentor.

Returned to her extended family in the Southwest, Emma’s troubles are compounded by a nasty custody fight among her relatives, evoking Cinderella-like difficulties and injustices that bring Caruso back into the picture. Emma recovers as she learns about and better understands her family’s secrets.

This is an interesting conceit, but the telling of the story unfortunately does not live up to its early promise. Important questions (e.g. the fate of some of Emma’s family) are left unattended, presumably to be answered in a planned Volume 2. And the failure of some scenes to flow smoothly from one to another sometimes confuses. Overly elaborate and irrelevant descriptions of the old Southwest also slow the story, a flaw that might have been inspired by Haag’s confessed love of the region.

Overall, the manuscript would have benefited from vigorous, professional editing. An example: In one scene, “Uncle Fritz” pulls out his pipe and knocks the ashes into the fireplace. The very next sentence again has him pulling out his pipe, a repetition that careful editing would have caught. Editing also would have fixed a sudden and mysterious shift in the point of view to first person from third person, resulted in crisper dialogue and eliminated grammatical errors, such as the frequent misuse of “further.”

The simplicity of the story and quality of writing suggest that the book might appeal more to young adults than adult readers. Overall, however, thoughtful revision would improve this offering’s attraction for all.