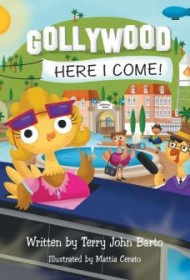 Anamazie, the youngest majorette at Wattle View School, dreams of being a star. Terry John Barto and Mattia Cerato’s vibrant picture book tells of the little turkey’s journey to fame in Gollywood, Here I Come!

When Anamazie doesn’t win the Gobbleville’s Got Talent show, she puts on a brave face, but is devastated. Her shattered dreams of stardom are quickly repaired, however, when a talent scout invites her to an important audition. Anamazie wows the “one and only J.B. Tuttlebaum,” the movie’s famous director, and lands her breakthrough part.  Soon, Anamazie’s dreams take flight, and she sees her name in lights. Fame doesn’t ruffle Anamazie’s feathers or swell her head. She returns to her old school to encourage other kids to pursue their dreams, too.

This book covers a lot of ground in 32 pages — perhaps too much. Anamazie twirls her baton in marching band, auditions and loses Gobbleville’s Got Talent, speaks with the talent scout, auditions for the movie, shows how green she is and frustrates a more professional actor, sees her name in lights, becomes a star, and returns to her old school all before the last page.

While Barto’s narrative is a little unfocused, Anamazie’s story is a fun look at society’s obsession with celebrity. Anamazie is a genuinely talented little turkey, and she’s willing to work hard for her dreams. The real show-stealer is Anamazie’s mother, a “Stage Mom” extraordinaire. Henrietta’s hilarious antics are told more through the illustrations than the actual text. In one scene, Henrietta is trying to force her way through the soundstage door while Anamazie auditions for J.B. Tuttlebaum.

The narrative could use a little refining, but the bright illustrations are delightful and humorous. Overall, Gollywood, Here I Come! is an entertaining book that will engage young readers dreaming of seeing their own name in lights one day.