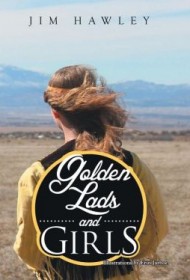 In the ‘60s, the times, they were definitely changing. Jim Hawley seeks to show just how much in this story of an idyllic childhood that turns tragic with the harsh realities of the Vietnam War era.

Hawley focuses on Pearl Morgan, who enjoys a wholesome Wyoming girlhood. Her family may be poor, but she’s smart and grows up fast, eventually trading saddles for surfboards as a UCLA student. There she meets the charming Christopher Fallon, a would-be law student destined instead for helicopter pilot duty in Vietnam. The story is predictable, and we can easily guess what’s coming, even without the flash-forward first chapter that so clearly foretells trouble.

Instead of seizing on the potential for drama inherent in this tale, Hawley takes us through the everyday details of Pearl’s life with exhausting thoroughness. Some of the moments he captures set the scene and time period well (such as when Pearl buys a Coke for a nickel), while others are pointlessly detailed (as when we accompany Pearl on a step-by-step tour of the UCLA library).

While the book competently chronicles one small-town girl’s coming-of-age in a tumultuous time, it rarely reaches for the emotional heights or insightful depths of true storytelling. Hawley could increase reader interest by trimming the procedural detail and devoting more space to Pearl’s emotional development. For example, we get only a shallow look at the inner process that leads Pearl away from her conventional roles as a student, secretary and housewife to the more radical activities she participates in as a pot-smoking war protestor, probably the most compelling part of her story.

Golden Lads and Girls is a familiar tale of innocence lost that seldom does more than skim the surface of a fascinating era. While former flower children will find Hawley’s retelling frustratingly superficial, younger readers may find this a useful introduction to the basic background of the ‘60s.