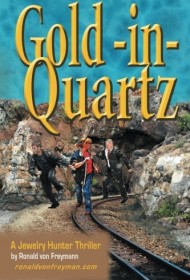 Ronald von Freymann’s second Jewelry Hunter thriller finds Bill and Jenn Watson once again involved in international intrigue, after they disrupted a terrorist plot in Avalon Bay, the first novel in the series.

Hoping to find a supply of gold in quartz for Jenn’s jewelry business, the Watsons pay a visit to the Speckled Gold Mine in Alleghany, California. When they arrive, they interrupt a crime in progress that leaves one mine employee dead and one grievously injured. After multiple attempts on their lives, Bill and Jenn realize the bloody scene they stumbled into was not a robbery gone awry, but part of an international conspiracy.

Frank Evans, the Watsons’ overwhelmed FBI handler, arranges witness protection for them in New York and Paris, but their enemies still remain on their trail. Eventually, with the help of their gung-ho friend Tiffany and one of Evans’ colleagues who has a flair for the dramatic, Bill and Jenn head for Johannesburg to confront tycoon Hendrick Van-Aken, the man responsible for the carnage.

Gold in Quartz features a glamorous and topical hook – skullduggery in the jewelry trade – and a few exciting chase scenes. But a successful thriller needs sympathetic, or at least interesting, protagonists. Bill and Jenn come off as abrasive and unreasonable, particularly through their continual sniping at law enforcement.

When they stumble upon a grievously injured man, for example, they spend time dismissing a 911 operator’s questions as irrelevant, rather than simply answering them and speeding the process of getting help. They also bristle at a first responder’s request that they drop their weapons as he enters the crime scene, and never manage to have a completely civil interaction with Evans.

These many pages of snarky dialogue frequently bring the novel’s momentum to a halt. As the story progresses, it becomes a substantial flaw — one that ultimately keeps Gold in Quartz from standing out in the crowded thriller genre, despite its good points.