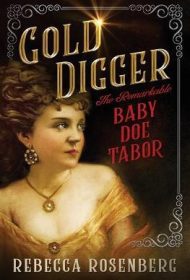 In Gold Digger, novelist Rebecca Rosenberg delivers a fictionalized account of legendary Elizabeth McCourt Tabor (“Baby Doe”), a spirited young woman making a life for herself in Colorado during the 1800s.

In 1878, recently married Baby Doe moves with her husband from Oshkosh, Wisconsin, to Central City, Colorado, to oversee his family’s mining investment. Determined to learn firsthand about the business, she flouts societal norms and works in the mine alongside men. Both the mine and her marriage soon appear worthless, and she divorces her drinking and philandering spouse who abandoned her.

Striking out on her own, she moves to Leadville where she works in a haberdashery. Despite the stigma of divorce, her beauty attracts potential suitors, but she rejects them, determined that “Never again would she surrender her will to a man.” However, she soon finds herself attracted to an older married man, mayor and silver magnate Horace Tabor. Amid public scrutiny, she must choose whether to follow her heart and jeopardize Tabor’s political future or to remain independent.

The Old West comes alive through Rosenberg’s descriptions of the gritty new state and its colorful inhabitants. Miners clad in sooty denim and bankers sporting pork chop sideburns cross paths and swill whiskey at the local saloons. Lingo such as “hornswoggle” and “skilamalink” enriches the writing, although occasionally seems overused. Rosenberg’s research enables her to shine a light on lesser known aspects of Colorado’s past, such as the 1880 Hop Alley Riot in which a mob destroyed parts of Denver’s Chinatown. Passages of Baby Doe’s real diary frame sections of the book, but Rosenberg does not reveal how much her narrative tracks the historical record.

Overall, she presents a sympathetic portrait of Baby Doe, despite her protagonist’s reputation as a gold digger, delivering a captivating saga based on the true story of a bold woman mining for romance and riches in the Old West.