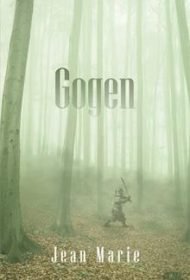 Jean Marie’s horror novella Gogen, set in late 1400’s Japan, wastes no time getting to the action. After a two-page prologue told in first-person by a mysterious narrator, the book launches into the grisly experiences of Yari, a lone samurai scout.

Yari’s mission is to explore Harutaka, a castle where his younger brother served as a member of Lord Kano’s guard. Upon arriving, he discovers a ruined castle infested with rats and surrounded by headless corpses on crucifixes. Death and destruction is everywhere as Yari works his way up each level to Lord Kano’s chambers.

Along the way, he meets a supernatural creature that warns him of an undead army intent on destroying him. Yari prepares for battle, but even with a makeshift barricade, spears, and samurai training, he finds his confidence waning after reading terrifying details from Lady Kano’s journal.

This brief novella keeps readers guessing about what horrifying scene the brave samurai will encounter next. It’s a taut story with tension rising with each floor ascended in the castle. The writing style is simple and direct, with enough Japanese words (kamashimo, wakazashi, etc.) to give the feeling of being in another place.

The story’s creative elements work well, but a few technical glitches mar the book. The author’s biography is incorrectly identified as a “Bibliography,” and although generally tightly written, the text contains some typos, and repetition: “Yari grabbed his two swords and spearhead for another vantage point, an area that was free of blood. Even with more light, he found almost no area untouched by the blood. He finally found an area that was free of blood and bodies. Down a long narrow hall, before the castle’s shrine, he saw the floor free of blood and bodies.”

Overall, though, this brief story delivers what it promises on the back cover: a “supernatural fantasy [that] evokes universal fear on every page.” Readers interested in samurai warriors, ancient Japan, and horror will enjoy this quick read.