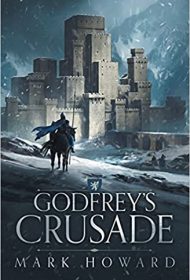 Young Godfrey is enthralled by his family’s symbol—the griffin—and the mythic tales of Cheldric relayed by his father, Duke Ulric. When a crusade is called to save the kingdom of Azgald in the faraway, snowy Nordslands, Godfrey takes a sacred oath to the Sun God to lead his father’s knights and men-at-arms north until Azgald is safe again.

He has one dream-vision where he sees his true love, Madeline, and another in which he’s told he must defeat a great black dragon or the Crusade will fail. But Godfrey learns that the largest threat to the Crusade are the political machinations, greed, and rivalries among the dukes who march alongside him with their own armies and agendas.

To succeed in his quest, Godfrey must fight orcs, vampires, the undead, trolls, hydras, cyclopes, berserkers, and ultimately defeat not only High Warlord Alvir and his consort, Nera, the Great Witch of the North, but also the dragon, Vozzab. To aid him in his quest to be like the mythical Cheldric, he’s given a magical sword dubbed Uriel; two true friends; Madeline, whose magical powers must be kept secret or she will be burned as a witch; and the griffin Spathi (to help fight Vozzab). But Cheldric died in his own quest. And Godfrey wonders if he’ll meet the same end in the frozen Nordslands.

The plot is intricate, and the action appropriately violent. “Plunging Uriel through the neck of an orc,” writes the author, “Godfrey’s arm was drenched in the foul creature’s hot spewing blood.” To balance this, the author delivers intriguing philosophical elements, including the requirement for vigilance and fortitude for men devoted to becoming worthy of knighthood.

This skilled story has everything a fantasy reader could ask for: monsters (human and otherwise), intrigue, romance, and the quest for true knighthood. It is highly recommended.