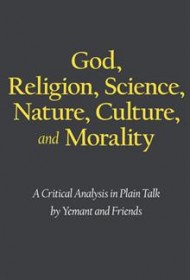 God, Religion, Science, Nature, Culture, and Morality purports to be a record of thoughtful conversation between four retired professors on the biggest philosophical questions. It claims to offer critical analysis of the origins of the universe, evolution, the soul, and the existence of God in accessible language. Both its successes and failures arise from that very mission.

The book contains dialogue from different perspectives (sciences, humanities, theology), but the narrative never feels natural or conversational. One participant will begin a prescribed lecture until that speaker is interrupted by another for clarification or encouragement (each speaker is represented anonymously). Their voices sound virtually identical, and the questions they ask act merely as prompts to continue, rather than as offers of debate. The topics themselves proceed in logical enough order (starting with the origin of the universe, extending to evolution, then cultural issues such as morality), but the authors take no decisive positions, offering only impressions and observations. For an academic work, it lacks a strong thesis.

The authors attempt to make heady topics accessible by avoiding intricate theories or relying on specific thinkers, but in both respects they wind up in the weeds. The scientific information remains somewhat technical, and they can’t avoid outlining the ideas of important thinkers. Sometimes, they oversimplify into inaccuracy. Kant’s Categorical Imperative is a casualty, the presentation of which is devoid of much needed nuance. Their distinctions between atheism and agnosticism suffer a similar fate.

In short, God, Religion, Science, Nature, Culture, and Morality reads like a transcript of a stilted dialogue between academics, but it lacks the insight, originality, or excitement to inspire much dialogue itself.