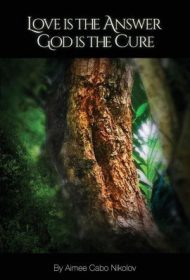 After a lifetime of horrific abuse, Aimee Cabo Nikilov proves that faith can sustain you and love truly conquers all in her compelling memoir Love is the Answer, God is the Cure.

As a small child, Nikilov was regularly molested by her stepfather while her mother was working. At 15, she finally sought help from authorities—a decision that tore apart her family, resulted in a rather high-profile custody case, and permanently estranged her from her mother. In foster care, while living on the streets, and eventually as a young single mother, trouble seemed to stalk Nikolov as she was repeatedly raped by various men. She wondered if they could “sense that [she] had been sexually abused,”  and worse, she feared that maybe “the abused goes for the abuse” and that it was all her fault.

In shocking detail, Nikolov chronicles how she fell prey to more than her fair share of misfortune: In addition to rape, drugs, alcohol, prostitution, forced abortion, manipulation, betrayal, and abandonment left her scarred and suffering from a form of PTSD. Yet through all the darkness, she clung tightly to her faith in God’s love. Like threads of gold woven into a black canvas, Nikolov inserts Bible scriptures and prayers throughout her troubling memoir. These uplifting words stand in stark contrast against cruel events and take readers on an emotional literary journey that mirrors Nikolov’s life.

Although inspirational and religious in nature, Nikolov’s writing is not for the faint-hearted. Her unashamed use of expletives in the dialogue and vivid descriptions of how she was sexually molested and raped may be deemed inappropriate for the Christian genre. However, Nikolov’s bare-all style gives the wild events of her life authenticity, while her positive attitude endears her to readers.

Anyone who has suffered abuse of any kind, or walked even a moment in similar shoes, will find inspiration in these pages, and hope that love and truth will ultimately prevail.