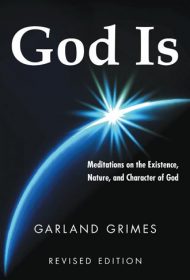 In God Is, author Garland Grimes attempts to give 21st century Christians a rational basis for their faith that answers the needs of a scientific age.

Grimes’s first three chapters use current science to argue that the existence of God is compatible with reason and evidence. He attempts to answer objections that the Bible is nothing but “religious propaganda,” insisting on its historical veracity. The following chapters, asserting that God is faithful, good, just, gracious, etc., are an eloquent restatement, in modern terms, of the Christian message. These chapters review the basic doctrines of Christianity such as the Incarnation, the Trinity, and the Virgin Birth.

Grimes illustrates his points with copious quotations from the Bible and from Christian authors such as Augustine, Aquinas, and Chesterton. However, it’s unclear whether he aims to convince skeptics or to edify committed Christians. The book’s first portion gives a rational argument for the existence of a god, but this is not necessarily the Christian God; Grimes’s arguments assert that the universe must have been caused by something which was itself uncaused. This argument could justify a god akin to Aristotle’s “unmoved mover” or the “clockmaker” god of the Deists, who “winds up” the universe like a clock and then allows natural laws to operate sans interference from a Deity.

Grimes leaps quickly from proofs that some kind of god exists, to specific teachings regarding the Christian God. In doing so, he gives short shrift to other religious traditions such as Buddhism, Hinduism, and Islam. Grimes’s treatment of these traditions is a strawman argument since he confronts them only superficially.

Grimes’s book is unlikely to move the increasing numbers of atheists and skeptics. Christian readers, however, will find in these pages a sober and occasionally beautiful account of their traditional beliefs, stated in a modern context.