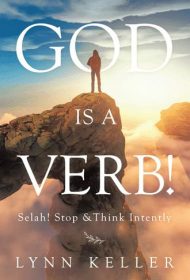 In this slim book, author Lynn Keller proposes that God is not a “big magician in the sky” or a thing, but rather an action—a verb.

Keller began conceptualizing her book after a class exercise at Cornell University where she was the sole student to answer that the purpose of religion was to “be nice to others,” to follow the Golden Rule. She argues that “anyone demanding his or her own religion for others is the most clearly separated from God.” Through philosophy and comparisons of various religions, including Christianity, Islam, and Catholicism, Keller proposes that “there is no one religion or path that is better.” Our purpose, she notes, is to make a return to God through acts of kindness and love.

Keller’s theories are deeply philosophical and theologically cryptic. This is not a quick read, and Keller challenges readers to selah or “stop and think about it” when concepts are confusing. Unfortunately, she too often passes hard questions off to readers. She fails to preface or elaborate on complicated claims and rarely backs her ideas with other writings or research. For example, she claims that Jesus “taught…the tree of knowledge as the path upward to God” but offers no Scriptural proof for the statement. When she encourages readers to “diagram your own precepts in the format of the tree,” she offers little guidance on how to complete such a task.

Most frustrating is Keller’s tendency to pack too many topics into her paragraphs. Her thoughts jump around, creating confusion. She then puts the responsibility for that confusion on readers. If readers don’t understand an idea, she exhorts them to “study it until you get it.”

Keller speaks of God throughout her book as a “He” that thinks, feels and does; therefore, contradicting her thesis that God is a verb. Ultimately, her ideas may pique the interest of atheists and philosophers but will likely fall short for devout readers of any religion.