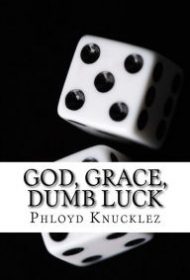 The unnamed narrator of this wildly improvisational amalgam of fiction and poetry marinates in paranoia, alcohol and rage. His anguished but often hilarious creator, Phloyd Knucklez (a pen name?) appears to be in precisely the same state: “[M]y protagonist [Okay, you might as well say it’s me] is on this search for personal identity,” he writes, earlier noting: “I struggle every day of my life with anger and ask god to work it out for me.”

The road is dark and sometimes tedious. Scarred by an unhappy childhood, frequent falls into boozy poverty, countless trips to the shrink and a bleak worldview (“I got very little faith in you, in me, in any of us”), the narrator/author is in “a very long-distance run against himself.” He doesn’t expect to win.

But our deeply troubled Mr. Knucklez writes with fierce originality. God, Grace, Dumb Luck is a jagged collection of seemingly unrelated fragments—personal, political, religious. But like a jazzman on a run of good solo choruses, he holds them all together as if by magic. His potent little riffs on contemporary life include a comic argument with a rabbi in a synagogue, a sketch of an unhappy wife who demands a divorce via DVD and a glimpse of two insufferable martini-drinkers. Knucklez’s interspersed free verse is invariably tart and direct. How’s this for a comment on the media?: “Facts and the facts/yellow with time/but the paperboy remains a boy.”

In the end, we behold a mind, and maybe a society, in crisis.

How much of the narrator/author’s method (and art) arise from madness (“I stopped taking my meds because I didn’t like the way they made me feel”) is impossible to know. A “shaven-headed hipster with his middle finger hovering on the self-destruction button,” he may also be “just one more post adolescent faux nihilist who’s unhappy because he gets drunk.” Regardless, this “fallen man” commands our attention with a book at once heartbreaking and exhilarating.