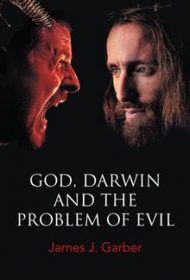 In God, Darwin, and the Problem of Evil, James J. Garber attempts to answer the age-old question: if God is good, then why is there so much carnage, prejudice, and general discontent in the world? This is not an easy topic to tackle, and Garber, a medical doctor with a Ph.D. in the humanities, acknowledges this. Yet, he contends that science can help us come to a new understanding that can alleviate some of our collective angst.

Beginning with a brief history of humanity’s formative years and on to our modern age, the author shows that “We humans have been at war with one another as individuals, families, tribes, chieftains, states, and globally for untold eons.” Many of these conflicts, he notes, arise from our religious beliefs. Garber cites numerous statistics from such theologians and thinkers as Hans Kung, who claims that the Catholic Church is responsible for at least 9 million deaths since its inception. He also gives a brief history of torture, witch-hunts, anti-Semitism and the decimation of native populations.

In the book’s second half, Garber focuses on philosophers like Kant and Hume, scientist Charles Darwin, evolution and natural selection, eventually arriving at his theme, namely, that God has created “an evolutionary world full of evil because suffering is necessary for us humans to become better, stronger, smarter, more resourceful and more moral.” In sum, evil creates opportunity for goodness and growth.

While well argued, this isn’t a new idea. Many modern Christian theologians would generally agree with Garber’s premise. The author’s strength is in his ability to condense the material in an accessible, free-flowing way. He flies through millions of years of history and sums up Darwin’s sometimes-difficult science in simple ways. Unfortunately, the text includes numerous spelling mistakes, run-on sentences, syntax problems, and missing words that prove distratcting.

Overall, Garber’s book is an interesting collection of history and ideas, but it needs proper editing before it can be ready for a general audience.