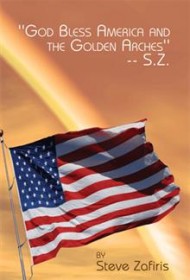 Steve Zafiris was bitten by the American dream when, as an 11-year-old in Greece, he saw a film in school about the United States. What struck him, he writes in “God Bless America and the Golden Arches” – S.Z. was the image of a young girl eating an apple.

For a young boy who had spent his life poor and hungry in a rural Greek village, suffering through World War II and subsequent political upheaval, that apple – he had never seen one before – was an epiphany. “Someday, I thought to myself, I’m going to have a whole bag of apples.”

He did better than that. Zafiris came to the U.S. at 16, penniless but with a dream to succeed. He wound up owning nine McDonald’s franchises and having two prosperous families – his own and his McDonald’s family.

Though the book is a retelling of the now-familiar American success story — someone starts with nothing and achieves the good life through hard work and dedication — it’s fun to hear it told with the enthusiasm Zafiris brings to the table. At times he comes across as a McDonald’s cheerleader, but under the circumstances – considering what the company did for him and his family – that’s understandable.

Written with the help of longtime friend and former McDonald’s executive Al Cole, this memoir is an easy read. The two authors have avoided overloading the reader with corporate information. Instead, Zafiris tells us his life story, which he says he is doing for his children and grandchildren. The reader doesn’t need to be a relative – or even a McDonald’s customer – to appreciate what Zafiris achieved.