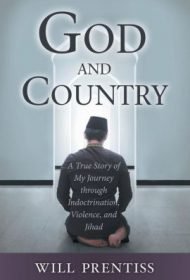 Will Prentiss’ memoir tells of how he became trapped between competing loyalties to country and friends post-9/11.

Prentiss’ childhood was hardly idyllic. At 7, he witnessed his father hit his mother with the family car during a fight. After his parents divorced, he eventually settled with his mother, who had joined an extreme fundamentalist church in rural Illinois. There, he was subjected to slave labor conditions as well as frequent brutal beatings—tribulations that led to his spiritual journey and eventual conversion to Islam.

Prentiss became a spokesman for peace within the Muslim community of the small Texas town where he settled. His life turned, however, when two friends became radicalized after 9/11 and began plotting to join the mujahideen fighting in Iraq. Caught between loyalty to them and the peaceful precepts of Islam, Prentiss chose to cooperate with the FBI. His resolve only deepened when watching his friends cheer a video showing a sniper killing American soldiers and troops blown up by IEDs.

“The entire plot was making me ill, on so many levels…It tore me to pieces…someone’s child was now shot dead. Someone’s spouse had been killed, and the brutality of war hit me like a ton of bricks… The friends I once loved so much became repulsive to me.” His friends later went to prison. Ostracized by the Muslim community and his life in jeopardy, Prentiss left the U.S.

The author writes about his difficult path to happiness in a straightforward way, offering the unusual and intriguing perspective of an American having seen both sides of jihad. Sometimes, excessive details—particularly about the inner workings of various Muslim organizations and the minutiae of the training camp he set up—bog down the story. But he generally creates an engaging and authentic narrative. The author comes across as believable and, admirably, avoids casting himself a victim.

Despite the book’s slower moments, anyone interested in post-9/11 America will learn from the lessons he teaches.