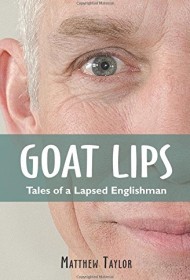 Matthew Taylor, a storyteller, humorist and actor, offers an autobiographical story collection that includes anecdotes about his rambunctious youth growing up in England and his rather impetuous decision to move to America, and subsequently Colorado. His 27 short stories are witty, deeply poignant in some cases, and highly entertaining.

Goat Lips might seem a strange title, but the story behind it sums up the author’s amusement at life’s absurdities. At an audition for a national Miller Light commercial, Taylor tries out for the part of the lips of a goat against some 70 others. He doesn’t detail how the lips will be incorporated into the commercial (or the goat), reveling in the preposterousness of the situation.

After acing the local Denver competition, his lips have to compete against those in LA and New York. “My heart sank. The goat lips in LA were sure to be beautiful. And as for the New York goat lips, well, they would all be classically trained…” Happily, he gets the part.

There are no missteps among these well-written stories. They zigzag between amusing stories of youthful indiscretion and touching slices of life that move readers in unexpected ways. In one particularly affecting moment, he learns of a friend’s accident, writing: “It’s from this point on that, if I were making up a story, I would alter it. But with a real-life story, the details cannot be changed… The beauty of real life is just that: It’s real.”

Taylor wraps up his collection where it began. In a follow-up to the goat-lips audition, he describes the making of the commercial: how his lips were surrounded by real goat hair while his face was shrouded in a hood and how he had to practice his three-word dialogue with a voice coach. His engaging story collection fully embraces the idea embodied in those three words: “Life is good.”