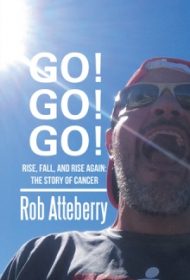 Recovery from any illness is a journey, but cancer poses unique challenges both to those afflicted and the people who love them. In his moving, well-crafted memoir, GO! GO! GO! Rise, Fall, and Rise Again: The Story of Cancer, author Rob Atteberry reveals how illness forced him to slow down, relinquish control, and rethink his values.

Atteberry writes in an upbeat tone about marrying Keri, a childhood friend and the love of his life, and embarking on a demanding corporate career to ensure he could provide for his family. Promotions meant extensive travel and periods spent living away from home, leaving Keri to raise their four children essentially as a single parent. When a recurring sinus infection becomes too much for Rob to bear, he seeks medical help, and testing reveals a lymphoma. After treatment, he still no longer feels like himself, but doctors repeatedly fail to catch the awful truth: The cancer has spread to his brain.

Atteberry’s writing style is straightforward, and he ably keeps the story moving. The chapters are named for song titles that track with the story, creating a playlist, of sorts, and the book includes 13 pages of photographs. If the story repeats a bit at the outset—Atteberry circles back to the theme of work and being away from home several times early in the book—things quickly pick up with his diagnosis and treatment. The struggle to get answers when he doesn’t improve reads like a medical mystery.

In the end, Atteberry is happily in remission, and his priorities have shifted to home, family, friends, concerts, and tackling several triathlons and a half Iron Man competition while holding down a new work-from-home position. Overall, GO! GO! GO! offers inspiration to readers, who will find themselves rooting for the author to keep meeting and defeating the challenges that come his way.