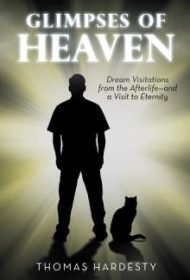 As the title conveys, this book offers accounts of visitations by spirits during the author’s dream state, including one in which he found himself walking alongside a loved one through a realm he believes was the heaven of his Christian religion.

Each relative “painted the perfect scene” for the visit. Grandma, for instance, appeared sitting in a lawn chair wearing her purple shorts while he dribbled a basketball, a scene that fit his childhood memories. Seeing her, he said, “Grandma, you’re supposed to be dead,” to which she replied, “Oh, I’m not dead, Tommy…I’m always here.” Hardesty saves the best story for last, in a chapter titled “Dad’s Third Visitation: A Walk in Eternity.” Here, his father, whom he loves but has had unresolved issues with, walked with him through a strangely different atmosphere, which, he concluded, is God’s kingdom.

A sportswriter by trade, Hardesty’s skillful writing comes through in his descriptive, often suspenseful narration. For example, the first chapter, in which his father dies, ends this way: “I had just experienced my first visitation from my father. But it would hardly be the last.”

Christianity features strongly in the beginning and end, where a series of Bible passages appear; Hardesty believes they mesh with his experiences, especially his trip to heaven. He also attempts to make a case for Jesus and a Christian heaven and hell.

These strong references will likely limit the audience to Christians who seek answers to life-death questions. Those readers will find much to ponder.