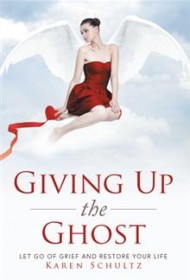 Rather than discussing the stages of grief, as Kubler-Ross did, Schultz argues that death doesn’t mean the end of life for the soul. Readers needn’t think of death as a loss, she writes, since deceased beloveds are watching over us. For support, she cites the Aramaic word for death, which translates as “present elsewhere.”

Her book is largely a convoluted discussion of various spiritual ideas interwoven with her own family’s interpersonal dynamics and experiences with loss. The author cherry picks from one branch of esoteric teaching to the next, tapping into Kabbalah, Edgar Cayce, Dan Piper’s book, 90 Minutes in Heaven, and the teachings of Ron Roth, among others.

The book suffers greatly from disorganization. For example, a chapter that begins with a discussion about guardian angels soon veers into talk about the “big boom” theory of how the world was formed, then relates the story of a psychic who spoke to an elderly group about heaven and ends with a lengthy entry about Schultz’s clairvoyant encounter with Elvis (and other deceased singers) while visiting Nashville’s Country Music Hall of Fame.

Occasionally, Schultz’ offers helpful advice. She suggests, for example, that mourners create rituals during wrenching anniversary dates, and tells of a client who, on the anniversary of her father’s death, lived a day he might have enjoyed, including eating his favorite food. In this way, Schultz shows that even seemingly mundane gestures can be healing.

But such moments are fleeting. Readers who can tolerate the narrative’s disorganization may find comfort through the author’s experiences and personal take on death. But for those seeking concrete help with grief, this book offers more frustrations than rewards.