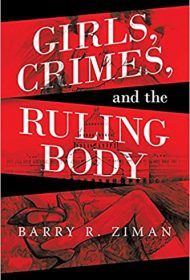 When the story begins, Ryan McNeil is the 24-year-old chief of staff to New York Assemblyman Nickolas Somatos. One evening, Ryan flirts briefly with a beautiful young woman he sees on his commute. The woman, who turns out to be a legislative intern named Cathy Wilet, disappears that night, and only Ryan seems concerned that the information the police have doesn’t add up.

The Wilet case remains unsolved, but Somatos’s star – and Ryan’s with it – rises. Seven years later, Somatos is a congressman, and Ryan has relocated with him to the D.C. area. Now, another young woman is missing, and someone is trying to frame Ryan for both this disappearance and Wilet’s. Ryan must clear his name while navigating a potentially deadly Capitol Hill rivalry and trying to keep his own secrets from ruining his marriage. While doing so, he uncovers a tangle of lies with shocking implications.

Ziman is a former New York legislative staffer as well as a veteran of the D.C. lobbying scene, and his experience shows. His portrayal of sleazy, rough-and-tumble politics is immensely entertaining and feels authentic, even during the plot’s sometimes improbable turns, from the high-drama planting of evidence against Ryan to the over-the-top antics of the main villain. Ryan, despite his personal flaws, is a likable, almost-Everyman protagonist.

Unfortunately, the novel’s writing style overwhelms its considerable virtues. The author indulges in consistent overwriting, as in: “Ryan’s dreams, a sentimental, sand creation of his sleep, were wrecked and crumbling now as a tide of awakening swept over him.” Such overwrought sentences become wearying as the novel progresses and drag down the story’s momentum.

Girls, Crimes, and the Ruling Body has the bones of an intriguing political thriller. Its narrative style needs improvement, however, before the book is likely to appeal to a wide audience.