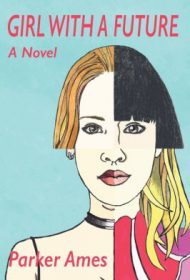 Girl with a Future is a contemporary novel about Angie Cohen, a 17-year-old Canadian woman who turns down offers of athletic and academic scholarships to embark on a journey of self-discovery.

Hit by the dual deaths of her father, from cancer, and her friend, who commits suicide, Angie sets off to Europe. There, she falls in love with an artist, but after some troubled events, ends the relationship and returns to Canada, taking a range of part-time jobs, from waitressing to data input. Several resets ensue, including a move to Vancouver, new relationships and changes of direction.

Parker Ames delivers a bold, unvarnished portrayal of an individual struggling to find herself. Angie is fascinating, if not always lovable. She’s clever, honest, and driven, but also self-centered and irresponsible. Her poor decision-making at times threatens her own and others safety, and she has trouble making and retaining relationships. Although immensely capable, she only feels complete when supporting and directing another’s endeavors (generally a boyfriend’s).

The novel includes some challenging content, including abortion and sexual assault. It also contains several detailed sex scenes. While this may deter some readers, in many ways, Angie’s bald, unromantic telling of her story is the novel’s key strength. Physical descriptions of characters are succinct and vivid, and her experiences in Europe are well described and moving. Angie’s time in Vancouver is a pleasure to read, as she seems to have found some purpose, and the more likable aspects of her personality shine through. The dialogue between Angie and her new friend Samuel is vivid and compelling.

Structurally, the story moves too often from present to past, and it dwells on Angie’s backstory to the detriment of the present-day narrative. A section dealing with Angie’s part-time jobs seems unnecessary, failing to advance her character or the plot.

Despite its flaws, however, Girl with a Future is an engaging coming of age story that doesn’t pull its punches.