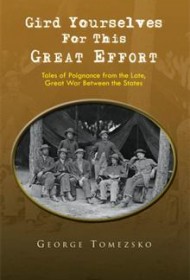 This slim volume about the Civil War combines nonfiction with short stories to offer an especially vivid view of battle. It is extremely well-written, but with an ulterior motive that many will find disturbing.

The title of the book is drawn from an announcement by Confederate authorities attempting to amass supplies for their armies, which were staggering under the weight of the Union’s assault. The volume combines a factual account of one specific Civil War battle in which the South nearly held the Union at bay, with five short stories set during the Civil War, some based on fact and others entirely fictional. The book is well-researched, containing both a bibliography and index, and displays great flourish, with scenes that take readers directly to the battlefield via strong description and sensory detail.

The short stories are similarly well-wrought (although one is so overloaded with symbols that the author includes a lengthy footnote explaining them all). Details about supplies, munitions, and even food bring wartime’s day-to-day realities to life.

What’s troubling is author George Tomezsko’s clear bias as he romanticizes “Johnny Reb” and disparages Union soldiers. He neither mentions slavery, nor concedes any possible idea of higher purpose to Union soldiers or leadership. He concludes the essay section of the book with: “We will let the shallow and vulgar victors and their successors, who have confused equality with justice and freedom with license, tell their own story. For all who love the truth…all genuine hope will not end.”

The notion of the Union leaders and soldiers as “shallow and vulgar” will be offensive to many, and it’s a shame that a book of genuine quality has been written with such a toxic agenda attached. Some will no doubt love this offering, but it’s only fair to warn readers that this is potentially upsetting material.