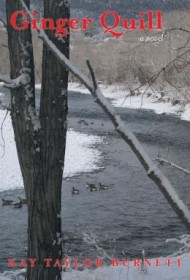 Mae Maguire tries to escape the trauma of her divorce from an unstable and threatening husband in Texas by taking a sabbatical to South Fork, Colo., only to find herself caught up in another drama in this story set in 1983.

Mae, an artist, has gone to spend time at the fishing cabin of Joel, a long-time friend. While there, she takes a romantic interest in his neighbor, Johannes, who shares with her his unique connection to a World War II camp for German prisoners located nearby. But Mae begins to feel uneasy when Joel’s cabin shows signs of break-in and entry, and she fears her ex has tracked her down.

Through numerous flashbacks, author Kay Taylor Burnett drops many story-line breadcrumbs into the narrative that only minimally advance or enhance the plot. The title Ginger Quill, for example, refers to a preferred feathered fishing fly used by Mae’s father that has deep meaning to her since his death, but only tangentially relates to the larger plot.

While the book is free of misspellings and typos and includes a nice map of the Colorado and New Mexico locales mentioned, structurally it falters. Its beginning is long and sluggish, lacking the friction and intensity critical to quickly drawing in readers. Burnett handles descriptive settings adequately, but the writing lacks the sass and shimmer of sentences penned by more skilled writers. Similarly, characters are thinly drawn. And while Mae seems a likable protagonist, one never truly feels the depth of her fears or concerns.

While the reader learns interesting things about the World War II camp as well as elements of nature amid the rugged terrain, overall, the book’s elementary writing style and simplistic plot elements aren’t likely to engage a wide audience. The plot resolves with a ho-hum, forgettable ending, punctuating the disappointment readers may feel with the story as a whole.