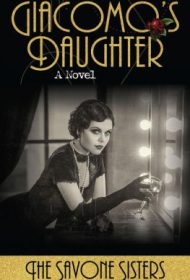 Rosanna and Diana Savone’s Giacomo’s Daughter, tells the compelling story of a young woman caught up with the Detroit Mafia in 1924.

Eighteen-year-old Sofia leads a sheltered life with her loving Sicilian immigrant parents. Believing that women can be only nuns, wives, or prostitutes, her father, Giacomo, lays down strict rules for her behavior. Nonetheless, Sofia sneaks out one evening to fill in for a singer at a downtown nightclub. That night, she meets two men: Luca, an autoworker she’s immediately attracted to, and Max, second-in-command of the local Mafia, who takes an interest in her. Soon after, as Sofia becomes more enamored with Luca, Max proposes.

Fearing retribution, Sofia’s family forces her to wed Max. Now ensconced in a grand Gross Pointe mansion, she abhors her husband who had “forced himself into her life like a tornado, destroying every ounce of happiness within her.” As Sofia laments the lack of control she has over her life, she questions her protective upbringing and sheds her naiveté.

While Max embodies the archetypal Mafia don, the authors offer an intriguing twist on the typical male-driven Mafia novel with their young female protagonist. Sophia exhibits a growing desire to transcend traditional subservient female roles. For example, she insists that Max, who has never cared about her opinions, listen to her perspective on the night they met. (Although important to fully understand events, this retelling of their meeting slows the story’s momentum. However, the action later quickens and the plot takes surprising turns.)

The Savone sisters have crafted a well-written novel with a complex main character. Peppering the flowing prose with period terms such as “bee’s knees” and “giggle juice,” the authors immerse readers in 1920s Detroit, a city flush with auto industry riches and awash in bootlegged alcohol. The story also raises the issue of domestic violence.

An engaging first installment of an intended trilogy, Giacomo’s Daughter will appeal to fans of organized crime and historical fiction alike.