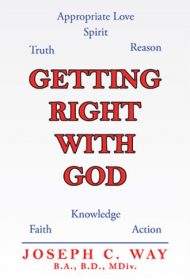 The question of who or what God is, and how belief in Him fits into one’s life, is universal. Here, Joseph C. Way attacks that imponderable while challenging conventional wisdom and examining how “presuppositions” (his term for beliefs) block living a life of Truth.

Pulling no punches, Way immediately proclaims he will share his truth. While he admits he can’t absolutely prove every conclusion, he notes that he’s comfortable with his beliefs. Readers are, thus, forewarned that this provocative work may challenge their accepted perspectives.

Way first explains his view that a god is any driving factor of control for an individual. He imagines how the Abrahamic God evolved through the Old Testament and posits that this God is one spirit among many, rather than a unique essence unto Himself.

Most of this book, however, challenges Christianity’s core practices, which Way believes impede living in alignment with his definition of God. He denies the Trinity and is adamant that Jesus was a mere mortal and that a virgin birth is pure myth. He also believes, among other ideas, that the resurrection was metaphorical; that the Gospel writers never met Jesus; and that modern-day Christianity hinges on the renegade beliefs of Paul of Tarsus, rather than the authentic proclamations of Jesus.

Way is persuasive, yet his assertions sometimes lack logic. For example, looking through modern, 24-hour news-cycle eyes, he questions why, if Jesus was truly the Messiah, his message was delayed until co-opted by Paul; such life-altering information should have spread with unprecedented alacrity, he posits. He also proclaims that miracles couldn’t exist because he has no personal experience with them.

The book is filled with sentences beginning “I cannot be sure, but…” or “I have limited knowledge about…,” and “Many scholars believe…” without citation, indicating a lack of research, pure conjecture, or both.

This speculative take on Judeo-Christian theology decries the common religious practice of asking people to accept presuppositions, yet Way asks for the same. Ultimately, his heavily opinionated slant on the topic raises more questions than it answers.