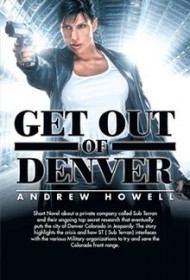 “Get out of Denver” follows the team at Subterran Incorporated, a scientific research firm facing a crisis. In an experiment gone awry, Subterran’s previous director injected an already troublesome microbe with extraterrestrial material. The resulting “goo” is expanding at such a rate that it has overrun its underground storage container and is heading for the city of Denver. Jennifer Alvarez-Miller, the company’s head of research, and her colleagues must stop the goo before it engulfs the city.

In “Scramble,” Staff Sergeant Jennifer Leigh discovers several suspicious Libyan and Syrian purchases of private war planes. When the planes go missing, Leigh and her team rush to locate them and figure out their owners’ intentions. Meanwhile, Bandir Bin Talal Rashid (also spelled “Bindar” at times), a Saudi playboy organizing an aerial competition, finds himself pulled into the crisis.

A character in “Get out of Denver” likens the situation he and his co-workers face to Michael Crichton’s The Andromeda Strain. In that novel of extraterrestrial microbial invasion, however, Crichton made readers feel invested in the plot by carefully building suspense. At under 100 pages, “Get out of Denver” doesn’t allow such investment. The novella veers among hurried exposition, uncomfortable attention to the shapely bodies of the female characters and awkward banter. A fairly long section devoted to the cover-up of a door to another dimension at Roswell Air Force Base never comes up again or proves relevant to solving the crisis.

“Scramble” suffers from an even thinner plot and less-developed characters. The dogfights (both real and staged) take place with so little context surrounding them as to render the story confusing. A potentially intriguing subplot involving Bandir’s affair with his brother’s wife abruptly falls out of sight.

Although these novellas focus on exciting subjects, both are lacking when it comes to execution and unlikely to appeal to genre fans.