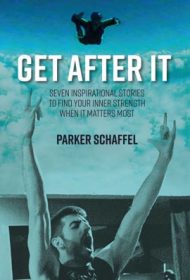 Serving as a U.S. Navy intelligence officer. Skydiving more than 50 times. Running a successful financial planning practice. Releasing multiple solo music albums. Serving in four Middle Eastern countries. Working for the CIA and State Department. Judging from his accomplishments—all realized by age 34 and listed on the back cover of Get After It: Seven Inspirational Stories to Find Your Inner Strength—you’d assume Parker Schaffel has something to say. And he does.

With a goal of helping others “learn from my adventures, as well as my mistakes,” the book lives up to its title by delivering a series of separate but connected tales, each followed by a short summary of lessons he learned about valuing intuition, apologizing and other relevant topics.

But his sensory storytelling is the book’s real strength. “I stood at attention—my body tall, shoulders back, fingers rolled into my hands …,” he writes of the tense moments before his encounter with a college ROTC commander. We are right there with Schaffel, hoping the parachute will open, as he hurtles through the air on his first skydiving mission. We cheer when he finally lands the job he’s been seeking for almost a decade. Despite youthful folly that occasionally gets in his way, we root for him because of his dedication to each task.

One issue: The bolded lessons offered at the end of each chapter are written inconsistently, which can be jarring. Most are full sentences (“Be patient.”), but some are incomplete phrases (“The importance of self-awareness.”) and others are personal choices he appreciates in retrospect (“Choosing history as my major:”), rather than actual lessons. Readers won over by his compelling persona will likely forgive such lapses.

The author is a man’s man, and it shows. But even those who know little about F-16s, football or heavy metal will appreciate his engaging stories and scrappy mentality. His last lesson for readers says it all: “Never give up. Never stop. Never quit. Get after it.”