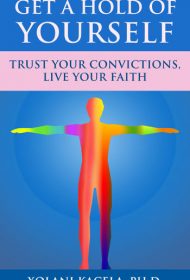 A Unitarian Universalist minister and chaplain for the New Mexico Air National Guard, Xolani Kacela shares how he went from a mixed religious background (the African Methodist Episcopal faith of his mother and the religious skepticism of his father) into a more stable, fulfilling life as a “spiritual humanist, meaning that spiritual practice and study are vital to me, yet so are the works of philosophers, poets, scientists, and musicians.” With daily practices such as prayer and meditation, spiritual journaling, and reconciliation, he believes anyone can grow from a life predicated on rules imposed from the outside to one built on a unique foundation of personal conviction.

Kacela defines people who have “a hold on themselves” as those who can “trust the living spirit’s promises and depend on sustenance from their faith community.” Specifically, this requires a commitment to “sustaining relationships,” to a faith community of one’s own choosing, and to “regular spiritual practices.” He gives a clear picture of several nurturing practices, with emphasis on how to cement them into our daily lives.

Kacela’s writing is slightly formal, which doesn’t obscure his authenticity, warmth, and humor, but rather gives his book gravitas. He has mapped out a unique space here, a place between traditional religion and New Age spirituality. His own experience with congregational worship and spiritual aid bestows him credibility, and he illuminates this spiritual trail with sacred texts of all religions and writings of a wide variety of spiritual mentors, including the renowned civil rights activist and mystic Howard Thurman. The book includes a 13-page bibliography of resource material at its end.

The author believes his audience will be 24- to 37-year-old men who may have felt uncomfortable in a more traditional religion, as he once did. Yet, his ability to credibly and passionately convey the benefits of a life of faith and the steps by which to achieve it will enlighten anyone looking for a more fulfilling way to live.