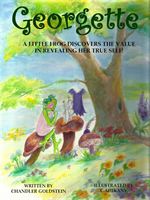 Chandler Goldstein’s debut picture book is a story about the importance of being true to oneself.

In the Great Enchanted Forest, where “the animals talked, the fairies sprinkled their dust . . . and there was a troll under every bridge,” a frog named Georgette excitedly sets off for the Grand Frog Tea Party. Georgette is proud of her lilac dress, chosen because lilac is the favorite color of Penelope, the most popular and fashionable frog in the forest. But on her way to the party, Georgette meets a fairy named Lola. Why, Lola asks, would Georgette want to impress someone she barely even knows?

Georgette asks Lola to change her dress to a color Georgette prefers: “the color of an enchanted blue bird.” But when Georgette arrives at the party, everyone else is wearing lilac, and Penelope and her friends laugh at Georgette and shun her. Then another frog, Carlita, arrives. Carlita, like Georgette, has chosen to dress as she chooses rather than follow the crowd. She and Georgette sit together and are joined by other independent-spirited party guests, until their group has “the colors of a rainbow.” The book concludes with a pair of easy-to-make recipes for punch and frosted cupcakes.

Georgette conveys an important message, albeit one that children’s picture books, from Rudolph the Red-Nosed Reindeer to Tacky the Penguin, frequently feature. Despite the occasional typo, the story is engagingly written, in a style well-suited for reading aloud by parents or teachers. Illustrations by C. Shikany are brightly colored and contain some lovely background scenery, but the characters themselves are often rather sketchily drawn. (The quality varies from illustration to illustration.)

All in all, Georgette is a pleasant book that holds some appeal for its target audience. But it is not extraordinary enough to be a standout in a crowded genre.