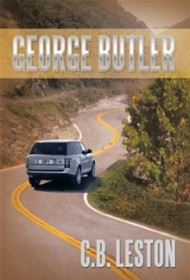 Complacency thrives in many countries where citizens take for granted easy access to food, electricity, phone service and other comforts. But what if the bottom were to drop out unexpectedly? That is the premise explored in C.B. Leston’s thought-provoking novel, George Butler.

Central character George Butler has a wealthy upbringing in the small fictional country of Borovia. He eventually takes over the family’s successful home building firm. For his family, he restores an old estate into a grand home, and then surrounds it with five upscale houses for his friends.

Becoming concerned about his nation’s years of foolish overspending, George purchases a large countryside farm as a safety net for them all. But when the economy fails, seemingly overnight, the group finds itself trapped within the city limits with no food, lights or means of communication. Worse, all routes out of town to the farm are blocked in a mysterious takeover.

With George’s cunning and help from friends, the resourceful man devises a means of escape. They are stopped quickly, and George becomes more confused when asked by an unknown group for his help in restoring order before his city totally melts down into a state of lawlessness.

Employing simple prose, Leston presents a vividly drawn dilemma in this plausible setup along with interesting character studies. Though not dramatic in nature, the writing skims along at a steady pace, keeping the reader guessing.

While the book is disturbing in that it creates a situation not unlike what could possibly occur as a result of present-day world economic crises, it reaches only a tepid climax, even after exposing the people and reasons behind the takeover. The ending also falls a bit flat.

Nonetheless, George Butler is imaginative and mostly well-crafted, opening avenues to introspection that should draw a wide audience.