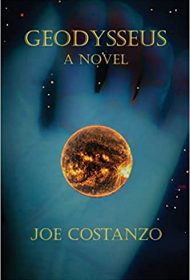 Geodysseus is a Cold War thriller with science-fiction underpinnings that charts the exploits of Dr. Frank Sartori as he investigates an enigmatic artifact that has been discovered in the Nevada desert.

A mysterious cargo-pod has been found in Death Valley, puzzling government agencies investigating its provenance. Is the container extra-terrestrial or the property of Russian operatives spying on their American counterparts? Map coordinates of sites near the container have been determined following the partial decoding of a strange disc discovered on the pod. These locations may provide information that could help unlock the pod’s secrets.

Enter Dr. Frank Sartori, working for the Atomic Energy Commission, whose task is to investigate the coordinates for clues. Aided by Army Corps of Engineers’ surveyor “Bobcat” Babcock, Sartori sets about uncovering a series of puzzles related to the pod and its technologically advanced magnetic capabilities.

Initially, Geodysseus reads like a by-the-numbers, Cold War science-fiction mystery about America’s 1950s’ atomic anxiety. But it soon becomes apparent that Sartori’s quest isn’t as straightforward as it seems. It turns out he has a personal connection to the pod; thus, his motive for deciphering it goes beyond mere scientific curiosity. As he travels the desert seeking answers, his sanity and identity come under scrutiny, and the book becomes about Sartori’s psychological and spiritual quest.

Sartori is a complex character whose scientific scholarliness is occasionally unfathomable. Thankfully, fellow travellers Bobcat and Kate Wilson, a journalist looking to break the story in the local press (and a potential love interest for Sartori), serve as counterweights to Sartori’s intellectualism. Kate also provides the narrative with compassion as her reporting highlights the impact of atomic anxiety on the wider community.

Geodysseus is a fine novel, buoyed by the author’s reader-friendly prose, bantering dialogue and empathetic characterizations. While the narrative may not have the propulsive qualities of a paranoid spy thriller, it remains a gripping, contemplative and intellectual read that will appeal to science-fiction and thriller fans alike.