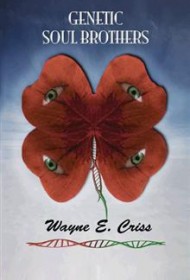 Genetic Soul Brothers opens with an original and enticing premise: in 1975, three years before the first recorded test-tube baby, Louise Brown, was born in England, four women from different parts of the U.S. are implanted with the blastulae (pre-embryonic fertilized ova) that will become identical quadruplets. The infertile couples that have the treatments are sworn to secrecy, never even to tell their children that they are other than natural members of the families.

Despite independent upbringing, the healthy babies that result from this genetic experiment grow to become amazing specimens: all with red hair and green eyes, each over six-feet, six-inches tall. They are uniformly athletic, handsome, intelligent and successful in related fields. As they mature, they begin to have dreams in which their unknown brothers play parts, and soon they suspect their suspicious backgrounds.

Eventually, they find one another and begin to question the effects of their relationships. When one is injured, all feel pain, and they converse telepathically. They begin to wonder if they share a single soul and to ponder whether the others could survive if one should die.

The basic idea has fascinating potential. However, author Wayne Criss struggles in two areas. First, the author is obviously well-versed in the science behind his story, but he spends far too much time both being overly technical in a way that will make it hard for readers to understand the science and, conversely, explaining mundane scientific aspects in minute detail. Second, too much prose is unrelated to the story. Whole chapters describe family vacations, and Criss takes several pages just to describe what a family had for dinner. Far too frequently, the reader will find himself saying, “Get on with it.”

In this first of three proposed scientific novels, Criss demonstrates considerable talent. If he can stick by his plots and find the right mixture of science and suspense, the succeeding efforts could be enjoyable, indeed.