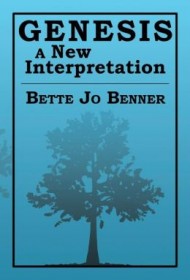 At the age of 11, Bette Jo Benner could not reconcile the God of love she learned about in Sunday school with the God of damnation preached from the pulpit. In Genesis: A New Interpretation she attempts to do this by examining the first book of the Bible through the lens of New Age philosophy.

Benner proposes “that the Bible is an esoteric book” containing “hidden information” in the names of its characters and story settings, as well as in numerical expressions. Regarding names, for example, “Cain…means possession, acquisition and selfishness [and] represents our ego” while Abel means “breath, vapor, and transitory” and represents the “heart side of man.” By translating names in the Book of Genesis and viewing the stories allegorically, Benner uncovers a hidden guide for developing what she calls “Soul [or] God Consciousness from our original state of self-consciousness.”

The book’s translations of the names in Genesis from the original Aramaic are the book’s most interesting aspect. For any biblical scholar, they open up deeper levels of meaning within the scriptures. Christians, however, may prefer traditional Christian resources for interpretation work rather than Benner’s New Age teachings.

Considering she is a learned minister (in the Church of Illumination), it is disheartening that Benner is so careless with documentation. She states that she “relied heavily on the writings of others,” noting that “they are listed in the bibliography.” However, it would have been nice to have the means to differentiate the author’s words from others and to match intriguing quotes with their authors for further study.

Another letdown is that after exploring the allegorical meanings encrypted in Genesis’ 50 chapters, Benner simply stops writing. A conclusion to tie her findings together is much needed.

While the book’s flaws and occasional typos may be forgivable to those on the “Path that leads to Soul Illumination,” the lack of proper documentation will weaken the book’s impact in serious philosophical and theological arenas.