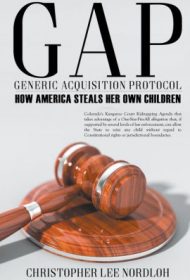 In GAP, Christopher Nordloh argues against legal proceedings that removed a child from her mother, Rebekah Nordloh (a.k.a. Rebekah Brouillard), awarding custody, preliminarily on an emergency basis, to her father, Kevin Jones. The mother never regained custody of her child.

The author states that one of his reasons for writing this book is to provide “parents who fall victim” to similar actions “a defensible position.”

He plunges right into his arguments, leaving bewildered readers to piece together the facts. Apparently, Jones, a resident of Alaska, had been visiting his child (pseudonym Joy) when he learned she may have been abused by John Gravier, an associate of Rebekah’s. Subsequently, Joy is taken from school and transported to Sungate, a Colorado organization that facilitates interviews related to child abuse. Rebekah isn’t allowed to attend Joy’s interview.

The author asserts that this violated Rebekah’s rights and that her absence, along with other discrepancies (i.e. jurisdiction issues, false information in the pleadings, and an unsigned order), make Joy’s removal from her mother’s care a kidnapping. He concludes that the judge, sheriff and father’s attorney conspired to “execute an illegal court order,” and extrapolates that other cases involving the judge and the Sungate facility abrogate the law. “This case does not only involve one crime. Investigators should review every case where Judge Arkin has seized custody of a child to identify the charge of endangerment.”

Nordloh, however, doesn’t supply proof that the problems in Rebekah’s case exist in others. He relies on rhetorical questions (“Does the 18th district [sic] of the State of Colorado consistently, habitually and intentionally act in contravention of the law?”) that don’t advance his argument, and much of his material is repetitive (e.g., repeatedly returning to Sungate’s withholding of the forensic interview documents).

Despite the author’s sincere outrage, this book would likely only appeal to those involved in this specific case. To reach general readers, the text requires significant revision with an eye toward making it more universally relevant.