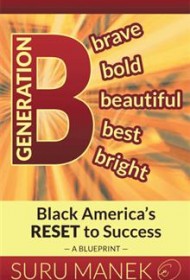 In Generation B: Black America’s Reset to Success, Los Angeles businessman Suru Manek offers his heartfelt prescription for curing what he sees as the ills of African-American life.

Manek bases his argument on the abstemious, conservative values of the Gujaratis, the East Indian culture he was born into in Kenya. An optimistic self-help book, Generation B describes the Gujaratis (Gandhi was one) as “family-focused, close-knit, culturally steadfast and prosperity-oriented” while being categorically opposed to “government intervention.”

The Gujuratis, long oppressed by British colonial rule, rose up by their bootstraps, Manek tells us, and he advises African-Americans to do the same: to stop using racism as an excuse for failure, to eschew welfare and to throw alcohol, marijuana and buying on credit (“the devil”) into the ashcan on the way upward. Manek endorses vegetarianism, calls for a dress code (“modest, gracious and elegant”), and praises “business-mindedness.” All in all, he calls for a fundamental change in “the African-American mind-set” that he believes will result in social progress and self-esteem.

In some respects, Manek’s stern Gujarati model resembles previous blueprints for black success—from the NAACP to the Nation of Islam to the Black Panthers—and his sympathy for the plight of African-Americans is obvious. His minimization of black victimhood and his idealization of the Gujarati culture as a cure-all will not please everyone. Nonetheless, Manek is a passionate writer, if repetitious and sometimes less than careful. Example: “Slavery is truly the most egregious of human rights.”

The conversation about race in America demands many voices. Manek now raises his, and there are good reasons to listen, regardless of a reader’s individual political and social views. He may or may not be a “visionary,” as he claims on page one, but he’s taken great pains to show us exactly how he sees things, through a Gujarati lens.