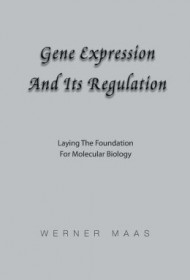 Werner Maas recounts his career path and role in the study and development of gene expression and molecular biology in his biographical science book Gene Expression and Its Regulation.

Maas does a nice job setting the scene for his science career, discussing his early interests in music and writing, and how, after deciding to focus on science, he eliminated the possibility of studying chemistry or physics because of the heavy mathematics involved. From the beginning, Maas comes across as a sympathetic young man with a genuine love for learning, and he guides readers through his personal history, following different professors, programs, and fields of study until he begins his own career in earnest.

As Maas garners respect for his own work, it’s the friendships and partnerships within the science world that make the book interesting. Maas recounts his first sight of DNA, courtesy of a senior scientist: “At one time, he showed me a test tube with DNA in solution. He added a little alcohol to the clear liquid and stirred it with a glass rod. He twirled this rod and then pulled it out. It dragged with it a layer of viscous, slimy material. ‘This is DNA,’ he explained.”

Scientists and laymen alike can appreciate the impact of such anecdotes, and early on, Maas keeps the science relatively simple. As the book continues, however, the scientific terms get longer and more complicated, and difficult for anyone but another scientist to follow. Though Maas’s work is fascinating—he was present when genes and chemistry were first being studied in conjunction with each other, and he contributed significantly to later developments—non-scientists will probably find themselves skimming the harder chapters.

As a result, the book is recommended mostly to readers who can understand the scientific details. While this limits the volume’s reach, this specialized group should find much of interest here.