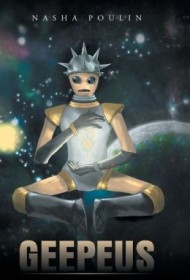 This science fiction adventure features a robotic humanoid known as a Geepeus and its travels through time and space with two archeologists from 20th century Earth.

The story begins intriguingly: Two archaeologists, Jacqueline Michaud and Jeremy McBean, are in South America investigating artifacts uncovered when an earthquake displaced an entire mountainside. Amid the broken fragments of pottery is a metallic egg with a small hole in it. When Michaud inserts a needle, the egg opens to reveal a pouch, but before they can investigate, enraged residents of a nearby village descend upon them and throw them into what seems to be a cave. It’s actually an opening into a spaceship commanded by the Geepeus.

This is where the story goes off the rails. The two humans inexplicably can’t leave (by simply walking back through the door) because the “multidimensional sequence” is damaged. So Geepeus takes them on adventures that include meeting the godlike Creators, traveling to the sixth dimension (where green-fog beings live) and visiting the Garden of Edema. Unfortunately, these jaunts are only superficially explored and poorly described. One scene, for example, where Michaud witnesses a Creator conversing with aliens, is portrayed flatly in this way: “They looked like masques [sic] she had seen in museums and in books. Others looked like humans, dogs, cats or gigantic life forms.”

Additionally, grammatical errors abound: Sentences such as “Jim have his arms up … ” and “More protections is needed … ” make this reading experience exceedingly challenging.

With such errors throughout, as well as undeveloped characters, a superficially explored storyline, and more, this novel is hard to recommend to readers.