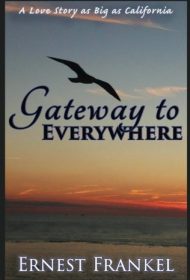 Clay is like a young Clint Eastwood, all discipline, polish and courage. Shannon is a spunky Julia Roberts as Erin-Brockovich-on-the-frontier. The novel chronicles their passionate courtship; their perilous journey home aboard a sailing ship and helping a crusty sea captain fight off pirates; struggles to make the desert blossom; and Clay’s ferrying aircraft to Mexico City to support a fragile government.

Historical characters include young Herbert and Lou Hoover; murderous Pancho Villa, intelligent and deceitful, yet with empathy for enslaved peóns; and cameos from Teddy Roosevelt and Sam Dreben, the “Fighting Jew.” Fictional characters include Cahuilla Native American Fate Lugo who knows the desert, and kind, handsome, rich Warren Turnage, who falls in unrequited love with Shannon. Most entertaining is Clay’s faithful compadre Achille Samson, a diminutive Jewish storekeeper with a Wild West shoot-’em-up history no one believes until it’s time for action.

The story rapidly unfolds over the decade-plus timeline. There’s constant conflict—man vs. nature, man vs. man, man vs. self. Descriptions are thoroughly colorful, whether in China, at sea, or in the desert. The length of the sections involving the Mexican adventure is problematic, with over-the-top battles and barely believable escapes. And some minor anecdotes could be dropped without losing cohesion. But others—women’s suffrage, Woodrow Wilson’s racism, and the minutiae of date fertilization—add color.

Frankel’s 600-plus page saga is reminiscent of Ferber’s Giant or Michener’s Hawaii—a highly readable adventure from a rollicking period of American history.