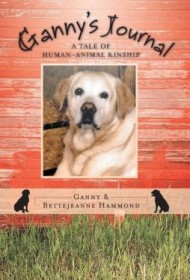 Ganny’s Journal is not your ordinary “warm and fuzzy” dog-and-human-relationship book. Bettejeane Hammond, a holistic animal rehabilitation practitioner, has taken this animal memoir to a spiritual level.

Ganny, a male yellow Lab, was one of Hammond’s six dogs (three yellow Labs and three Coton de Tulear). He became the lead pack dog after his mother and two other dogs passed on. Shifting from a playful dog to being the backbone of the pack, he became a role model to the remaining dogs, especially when it was his turn to die. With occasional interjections from Hammond, Ganny often acts as narrator here, sharing his life adventures, especially as his time on this earth comes to a close.

The memoir contains two sections. The first offers background to Hammond’s fun-loving pack (past and present). It also explains Hammond’s assertion that dogs use telepathy to communicate. Hammond writes: “[Dogs] think in visual images and transmit them telepathically. When they’re communicating with us, we often get their images without even realizing that we do.” In section two, Ganny begins to develop strange neurological symptoms (momentary blindness followed by the loss of mobility) as he poignantly transitions to the “Spirit World.”

At the end of most chapters, Hammond includes “Scribe Comments”: reflections on what her relationship with Ganny and the other dogs has taught her. Regarding Ganny’s illness, she writes: “How did he escape discouragement…and continue choosing to keep on keeping on? I think the answer is a simple yet profound one.” Ganny, she notes, lived “strictly in the present” with no longing for yesterday. “Honestly speaking, he handled his journey of challenge ever so much better than I did.”

Ganny’s Journal is a profoundly spiritual memoir. It is an animal lover’s book that will appeal to those who understand and appreciate the idea that the bond between animals and humans is more than mere companionship. Indeed, there are many important lessons we can learn from these wonderful creatures.