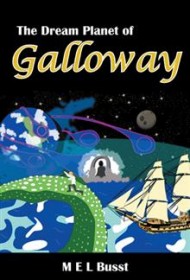 This action-packed young adult fantasy focuses on the dangerous sea adventures of Kimy Hills, a naval officer-in-training who lives on the small planet Galloway. Missing ships, killer frogmen, and ghost pirates are just a few of the perils facing Kimy and other Galloway residents, who are impacted by the dreams of Earth humans, whose nightly visions enter their planet through The Gates of Dreams.

Foofur Hills, the Royal Sails Minister and Kimy’s father, insisted his son become a naval officer despite his wife’s objections. When Kimy becomes lost at sea and presumed dead, Mrs. Hills weeps incessantly, while desperately hoping for his return. Kimy’s older brother, James, however, is not content to merely wait, and begins to form a theory about a connection between the missing ships.

Luckily, Kimy proves more resourceful than anyone could have imagined and receives helpful advice from the magical Gooroo Lady, who was one of the original creators of the dream planet. With her assistance, Kimy realizes his powerful potential, which is vital for saving Galloway from nightmares threatening its survival. The book concludes with Kimy saying, “This is only the beginning,” which (along with an author’s note) suggests sequels may be forthcoming.

Although featuring a compelling mix of narrative, dialogue, and action, this book contains little introspection. Even with near-death experiences and encounters with frightening unknown species, Kimy’s responses are mostly physical. Readers may wonder how these current experiences affect him emotionally and what previous life occurrences (other than his father’s strictness) shaped the young man. Additionally, the author doesn’t fully exploit the promise of his premise. With such an original conceit—a planet created by the dreams of people from another planet—a detailed explanation of how the process works would have been useful to readers.

The prose contains occasional writing issues, such as passive voice and grammatical mistakes, but they aren’t significantly distracting. Overall, this novel should provide an easy and enjoyable read for young adults.