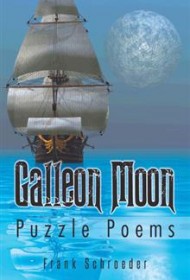 Galleon Moon: Puzzle Poems by Frank Schroeder is a book of brief, good-natured poems that rhyme. Shroeder writes about brotherhood, the glories of nature, and heaven, among other topics. Occasionally, his work traffics in blissful cosmic imagery:  “Road maps to stellar destinies / Whispers to my soul in harmony / Atmosphere I breathe on peaceful hills.”

Schroeder reveals a Eurocentric perspective in the Introduction when he exclaims that, “Like the early 14th century explorer discovered / new lands and claimed them in honor, so / shall you, the reader have the same opportunity.”  In one untitled poem, the speaker proclaims, “I want to hear a tale to tell / Magic and maidens and all that ends well,” displaying a nostalgia for medieval myths that permeates the collection. While such an approach may hold appeal to those enamored of the fantasy genre, it runs the risk of seeming rather childish and clichéd to other readers.

The collection presents other issues, as well: Schroeder uses end rhymes predictably and frequently makes awkward word choices to accommodate the need for rhyme. This results in puzzling lines, such as:  “This is such a calming tone / Such like a balming drone,” or “Reeling in natures’ beauty spewed/Sated Earths’ spotless flaw of quietude.” Often, the poems are overly prosaic: “Try not to worry of things you can’t sway/Everyone takes life like a big drama play.”

Almost all of the poems are contained on one page and most are one stanza. In an unorthodox twist, only three of the poems have titles; the rest have a blank line at the top.  Schroeder invites readers to consider, “If those were your poems what would YOU name it?”

Galleon Moon isn’t likely to interest lovers of sophisticated poetry, but it has a winsome, gentle spirit that might appeal to those with an affinity for mystical, sentimental verse who are willing to overlook the collection’s grammatical and stylistic obstacles.