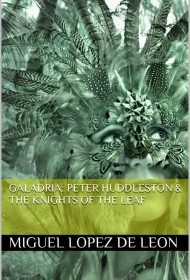 With the close of his Galadria trilogy, Miguel Lopez de Leon packs battles, travel and adventure into a story that’s ultimately about family ties. Peter Huddleston and the Knights of the Leaf goes out with a bang.

The second volume saw Peter take his first official visit from Earth to Galadria, the distant realm to which he is heir. There, at a parade in his honor, he was attacked by the rival Shadowray clan as clan members attempted a coup. Peter was pulled to safety by a woman who related some stunning information.

These revelations change everything Peter knows about his family, and in this volume, he is both shaken and relieved to finally know the truth. Meanwhile, the Shadowray clan’s attack on Galadria has left casualties on both sides, and the war is still raging when Peter and his grandfather travel through a dangerous fantastical forest (stop and smell the flowers here and you might doze off, never to awaken) to beg the assistance of the Knights of the Leaf, tiny creatures with wide-ranging powers.

Once reinforced, they return to face down Knor Shadowray. New information about his sworn enemy has left Peter susceptible to Knor’s trickery, though, and their final battle is both violent and driven by intelligence.

Once again, de Leon has filled the Galadria realm with fanciful creatures and challenges for Peter. A loner among his peers, Peter makes family of his teachers and Rune, his white tiger companion. His adaptability, honesty, and curiosity about everything from Galadrian plant life to politics make him likable and compelling to follow. By battle’s end, we’ve bid goodbye to characters we genuinely care about and have been prompted to reassess others who aren’t what we first thought they were.

This should be a surefire hit with young fantasy fans, but it has plenty to offer adult readers who enjoy a ripping yarn as well. Despite occasional lapses into repetitive language and some brief scenes where Peter acts out of character, the setting, characters, and ever-unfolding revelations about Peter’s family keep things moving swiftly along. Peter Huddleston and the Knights of the Leaf ties up the series artfully, in a way that leaves readers wishing for more.