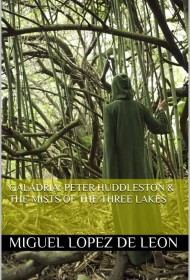 With Peter Huddleston and the Mists of the Three Lakes, author Miguel Lopez de Leon delivers the second in his promising Galadria trilogy for middle grade through adult readers. This story unfolds at a more languid pace, allowing the author to stretch out and explore the fantastical world he has created.

In Book 1, Peter learned that his Aunt Gillian was the ruler of the distant realm Galadria, and that as his aunt’s descendant, he was the rightful heir to the throne. After completing several “Rites of Passage,” he began to assume the responsibilities of a Galadrian prince.

In this book, we learn that Peter spent the school year with his dad and stepmom, waiting for summer and his return to Hillside Manor, where Aunt Gillian lives and which also contains a portal to Galadria. Once there, he resumes his studies, happily reunited with personal assistant Monty, his teachers, and Rune, his white tiger companion.

The diplomatic obligations of a young royal prove exhausting, so Peter gets some R&R before his first official visit to Galadria. This proves a good idea, as there, at a parade in his honor, the rival Shadowray clan attempts a coup. Peter is pulled to safety by a woman who drops a bombshell revelation about his family just as this volume draws to a close.

Most of the heavy action takes place in the last quarter of the book. In the majority of the narrative, Peter is ensconced at the manor, musing on his changing relationship with his father while strolling the grounds, observing dancing plants and other odd enchantments. The title’s “Mists” turn out to be a military unit of sorts that tries to stop the Shadowrays’ assault, with only limited success.

The narrative includes some misused words (often using “literally,” for example, when describing things that are figurative and interchanging “rites” and “rights”). But none of this quashes the excitement. By story’s end, readers feel closer to Peter, and de Leon reminds us that he’s just a boy doing his best to face adult responsibilities. The revelation at the finale is a genuine shocker.

Anyone who reads this far will return for Book 3; Mists of the Three Lakes sets readers up for a showdown of epic proportions in the final volume.