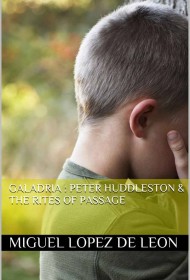 Peter Huddleston and the Rites of Passage opens a promising fantasy trilogy for readers from middle grade through adulthood, offering a story that’s action-packed, funny and with a solid moral center.

Peter is a loner, at odds with his dad and stepmother and still grieving for the mother who died when he was young. After he inadvertently antagonizes his stepmom’s best friend, his dad sends him to spend the summer with his aunt. He’s prepared to meet a spinster and her army of cats; instead, Aunt Gillian lives in a 3,000-room mansion called Hillside Manor, and has but one cat: a loyal white tiger.

Aunt Gillian, he soon learns, is also ruler of the distant realm of Galardia. Inside Hillside Manor, there’s a portal to this world, through which characters and items travel. As his aunt’s descendant, Peter is the rightful heir to the throne.

In order to cement this right, Peter is challenged by Knor Shadowray — who has entered Hillside Manor through a rogue portal — to perform the “Rites of Passage”: four tests of cleverness, perseverance, virtue and courage. Peter gets help from a dozen enchanted chocolates, which had been given to him earlier in the story. When he aces the ritual tests, Shadowray lashes out, and their battle for survival includes clever Galadrian weaponry, such as strength-enhancing gloves, a lariat with a mind of its own, and tapestries whose artwork comes to life.

Author Miguel Lopez de Leon balances fun and gravity nicely. After Peter faces one of the Rites, for example, the author writes that he “was covered in soot, had made a very powerful enemy, and had just signed away his future to a land he’d never seen. He couldn’t remember ever feeling so happy.”

The emphasis on virtue and perseverance are familiar themes, but de Leon brings fresh touches to the proceedings as Peter finds his place at Hillside Manor. Peter Huddleston and the Rites of Passage is an ambitious debut. With very few typos and skilled pacing, it should have kids, chocoholics, and the young at heart eagerly awaiting the next installment.