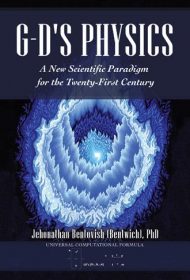 In a bold move, author Jehonathan Bentovish takes on the accepted scientific concepts of general relativity theory and quantum mechanics with his own theory of the physics of the universe. Using his scientific background and faith tradition, he aims to challenge Albert Einstein, Max Planck, Werner Heisenberg, and other physics heavyweights.

Bentovish designates his paradigm as the “Computational Unified Field Theory” (CUFT). His thesis is that it replaces the commonly accepted deterministic paradigm of physics with one that is a-causal, that is, one that is not in-and-of-itself formative and evolving. His analogy is to that of a series of cinematic film frames in which each frame is self-contained, broken by slivers of light, thus being recreated constantly. In this metaphor, explains Bentovish, reality is computed “frame-by-frame” by computation, dissolution, and re-computation at an incredible rate. The driving factor of this, according to Bentovish, is the Universal Consciousness Principle, which he identifies as G-d (utilizing the spelling of God preferred in some Jewish traditions).

To bolster his case, the author cites philosopher Thomas Kuhn, who theorized that scientific revolutions come in the form of paradigm shifts when necessary, rather than continuously within an accepted scientific paradigm, and thus asserts that his discovery is one such shift.

Unfortunately, the book is a dense read and extremely repetitious. The first half contains paraphrases of the CUFT explanation in each chapter, and the second half is comprised of six transcripts of Bentovish presentations on the topic, each also repetitive within itself. Additionally, Bentovish’s citations and references are to his own books, papers and presentations. In other words, he uses himself as the source of his theory’s validity.

Readers may have trouble connecting all the dots here, and the lack of depth of research will be apparent to those knowledgeable in the field of physics. Ultimately, despite the enthusiasm of the presentation, any merit of the theory gets lost in the execution.