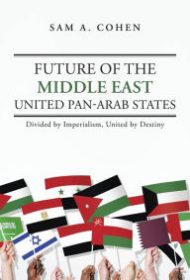 Any entry into the massive genre of books purporting to give a solution to the nightmare caused by dueling passions in the Middle East must be taken seriously: One can only hope that one of these books will have the answer to the centuries-old cycle of violence.

A portion of Sam A. Cohen’s new book advocates a proposed solution that can be found in scholarly literature since the Arab Spring: a formal, United Nations-like coalition between the nations of the region. Much like NATO, Cohen and others see this as a means towards stability in the area. While there are no notes, and Cohen’s evidence is, according to several short bibliographies, taken largely from online sources, he presents this argument cogently.

Yet this is but a small part of the book. Indeed, after a lengthy section that offers encyclopedia-like summaries of the background and makeup of all the Middle Eastern nations, Cohen presents the above Pan-Arab States argument in only seven pages (his Chapter Seven). The vast majority of the book—255 pages–is an anti-Jewish, anti-Israeli screed. While there is room to criticize, as Cohen does, the U.S. foreign policy in regards to its unwavering support of Israel, his tone and phraseology can only be described (although Cohen denies this) as anti-Semitic in nature.

Among the many examples, consider: “Jews are pretty gifted in bringing disasters upon themselves.”; “Jews act against their own interests when the opportunity presents itself to make money;” and “It is surprising that the Israelis are extremely racist…They seem to have no sympathy in their hearts towards anybody.” As for factual errors, here’s but one example: Cohen’s unbelievable claim that the Jews never set foot in Palestine.

One can only conclude that this anti-Jewish invective is the author’s real reason for writing this book. The Pan-Arabism of the title is a fertile field for research and intellectual thought, but readers won’t find it addressed in depth here.