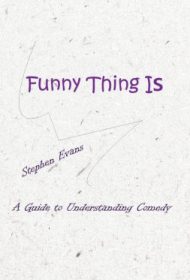 Funny Thing Is, by philosopher and playwright Stephen Evans, is a witty, insightful look at what constitutes and characterizes comedy. With its accessible style and straightforward approach, it follows in the vein of Harry Frankfurt’s popular philosophy work On Bullshit but hews closer to the literary style of continental philosophy than the anglophone analytical tradition and draws helpfully from the author’s background in theater.

In this concise investigation, Evans examines humor from a variety of angles—philosophical, literary, sociological, psychological, biological—enhanced with his special insight as an actor and playwright. He cites thinkers as diverse as Plato, Aristotle, Kant, Freud, and more recently Henri Bergson. The analysis is profound but the material is lighthearted, often genuinely funny, and pleasantly insightful.

Evans divides comedy into four basic elements (physiological, cognitive, psychological, and semantic), using each to elucidate how comedy has evolved to defuse fear, create solidarity, subvert expectations, and provoke thought. He also supplies entertaining examples of different comedic applications, with examples ranging from Shakespeare to Neil Simon to the film Tootsie. Although Funny Thing Is is accessible to anyone interested in thinking about comedy, it’s especially relevant to writers and performers looking to improve their work.

Evans exudes positivity and personally dislikes divisive forms of comedy (e.g. political comedy), so it’s no surprise that the weakest section of the book examines humor that offends and comedians whose careers suffer for it. His treatment of the topic seems cursory and uncommitted. For example, he deploys the example of Al Franken, who arguably was not driven out of politics by a joke or prank but by the numerous groping allegations that surfaced in its wake; other examples would have been better.

But that’s a minor flaw in an otherwise perspicacious book. Anyone who wonders at what makes us laugh is certain to enjoy Funny Thing Is.